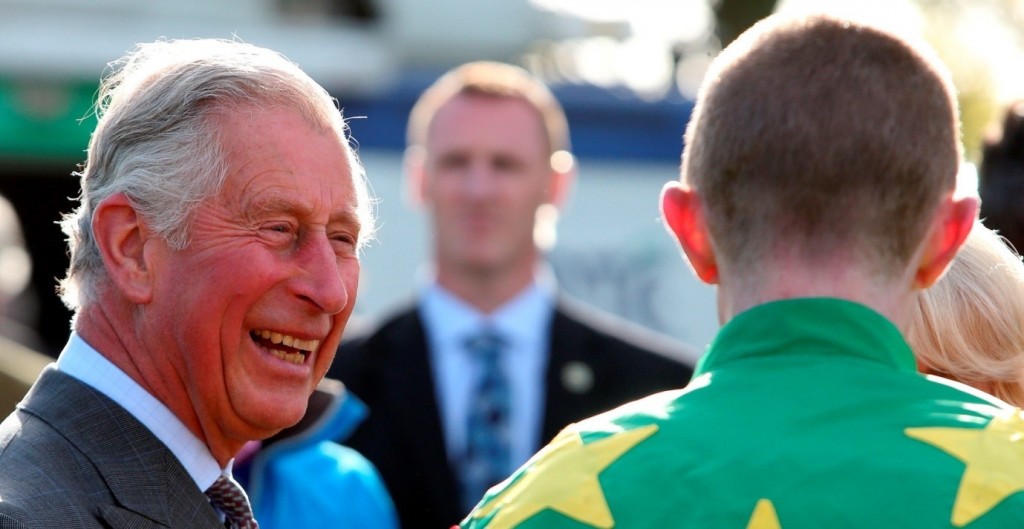 On May 20th 2015, Sligo Racecourse once again hit the headlines and this time for more than just another day at the races. Prince Charles and Camilla the Duchess of Cornwall decided to take in a race meeting on the final evening of their two day trip to Ireland. And by doing so Sligo Races earned a place in the annals of Irish history. The second race on the card was named in honour of the Royal Visitors, ‘The Duke and Duchess of Cornwall Mares Maiden Hurdle’. The cavalcade rolled into the enclosure amidst loud applause from the waiting crowds.  Welcomed by the Kieran O’Connor (chairman) and Kathryn Foley (manager) the Royal couple, ascended the stairs to the Benbulben Suite where they viewed the race from the balcony.   Security at the racecourse was at its highest and all anyone wished for was a safe and enjoyable evening at the races for the royal couple.  The evening turned out to be that and more. The couple were completely relaxed and fully absorbed the atmosphere. After the ‘Duke and Duchess of Cornwall Mares Maiden Hurdle’ the royal couple presented the prizes to the winning connections of Mollyanna. Colin Bowe’s mare was giving jockey Mark Walsh his second victory of the evening and the Duchess asked for the name of his ride in the third so that she could have a bet on it. The couple posed for photographs and chatted with all and everyone in the parade ring.  On their way back to the Benbulben Suite they met and spoke to the racegoers who greeted them warmly. They were then taken to the Cleveragh suite where they were introduced to the Directors of County Sligo Races and invited guests.  After viewing the third from the balcony they were ready for a cup of tea and some light refreshments. Before departing Kieran O’Connor presented the Royal Couple with a book on the history of Sligo Races by Rory O’Beirne and a wall plate of Benbulben, created by Sligo potter, Rosemary McGowan. The visitor’s book was signed by the Royal Couple and within minutes they were gone.  But all were of one mind “A stunning success at Sligo Races”.

In the weeks that followed the Royal Visit to Sligo Races it became known that the Duchess of Cornwall purchased Mollyanna the horse who won the race at Sligo. The incredible transaction was set in motion just five minutes after the six-year-old won the Duke and Duchess of Cornwall Mares Maiden Hurdle at the Sligo Races. Mollyanna is now among Camilla’s horses in the stables of Jamie Snowden in Lambourn.

A Day at the Races

The Hats Are On

Decide which cookies you want to allow. You can change these settings at any time. However, this can result in some functions no longer being available. For information on deleting the cookies, please consult your browser’s help.
Save my preferences
close

We use cookies to personalise content and ads, to provide social media features and to analyse our traffic. We also share information about your use of our site with our social media, advertising and analytics partners who may combine it with other information that you’ve provided to them or that they’ve collected from your use of their services.
doneAllow Cookies close cookiePrivacy policy settingsAdvanced