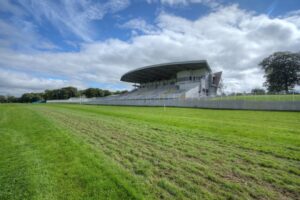 In August 2005 County Sligo Race Committee celebrated fifty years of horseracing at Cleveragh racecourse, which is situated within the Borough of Sligo and is reputed to be one of the most picturesque courses in the country.

Horseracing has been held at various venues in County Sligo from time immemorial but the earliest recorded race meeting under Turf Club rules took place at Bowmore, Rosses Point in September 1781.  This was a four day festival of racing over the three-mile horseshoe-shaped seaside arena with stakes totalling 200 Guineas.  Racing continued annually, barring a few cancellations, at this popular venue until the 1840’s.

After a lapse of a number of years Mr John Wynne made a new course available on his lands at Hazelwood in the vicinity of Sligo Town.  The first meeting at this venue took place on Wednesday, April 16th, 1873.  There were five races on the card, run under Turf Club rules.   In 1886 the lands at Hazelwood were unavailable for racing and the Sligo Race Committee of the day decided to return to Bowmore to hold their annual fixture.  They remained at Rosses Point course for the next twelve years. 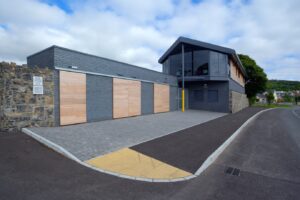 Racing returned to Hazelwood in 1898 and with the exception of the World War 1 years it continued there annually until the last meeting on the shores of Lough Gill was held on April 8th 1942.  At this final meeting several well-known local names are featured in the results – the Brownes and Rowlettes of Sligo, the Boyds of Easkey, Leo McMorrow, Sligo, Frank O’Beirne, Rosses Point,Frank Boland and H.C. Burke of Ballina.

With the loss of the Hazelwood venue Sligo races struggled to survive, even to the extent of staging a “Sligo fixture” in 1946-47 and again in 1949-50 on the Newbrook course outside Mullingar.’

As the Hazelwood course was no longer considered satisfactory for modern requirements a new permanent venue had to be found.  The committee considered various alternative sites in different parts of the county and even the possibility of a return to the old Bowmore course.  Finally they turned their attention to some lands at Cleveragh Demesne, which had recently been purchased by Sligo Corporation from the Wood-Martin family.

Having identified an area known as the “Pump Field” as a suitable site for a racetrack they approached the Corporation and the other relevant bodies with their proposal.  In 1949, following several inspections, the Irish racing authorities approved of the site.  The Corporation expressed its willingness to make the required lands available and a long-term lease was granted to the Sligo Race Committee.  Mr R.G. Brandshaw, the Town Clerk, was instrumental in facilitating this arrangement.

“Cleveragh” was known as “the place of the basket makers”.  With its sally gardens it is reputed to have inspired W.B. Yeats to compose “Down by the Sally Gardens”.’

The inaugural meeting for Sligo Races was held over the magnificently sited and picturesque course at Cleveragh on Wednesday afternoon 24th August 1955 with the first race at 3 pm.  Before an attendance of more than 7,000 racegoers the Mayor of Sligo, Mr E. Tolan, formally declared the new racecourse open.  All those present, owners, trainers, jockeys and the general public were high in their praises for the layout and construction of the new course.  From an early hour on Wednesday  masses of people were arriving in Sligo by car and on the many special trains and buses laid on for the occasion.  A special train left Tuam at 10 am.  There were also cheap day excursion tickets on the Dublin to Sligo line.  An excellent shuttle service of buses was provided by C.I.E. at a fare of 6d return to bring patrons from the Railway Station to and from the course.

On the course itself dozens of bookmakers operated both in the enclosure and on the popular side.  The Tote operated from two temporary outlets with a total turnover for the day of £4,030.  The admission charge was 10/- to the “Grandstand and Enclosure” and 2/- to the “Popular Enclosure”, which was located on the inside of the track.

The programme consisted of six races:

The return of racing to Sligo received widespread coverage in both national and local press.

On Wednesday August 24th 1955 the racing correspondent for the Irish Independent, Michael O’Hehir, wrote the following:

“After a lapse of some thirteen years racing returns to Sligo today, when the new course at Cleveragh, not far from historic Knocknaree Hill and famed Benbulben, should be the meeting place of a big gathering of racegoers not only from County Sligo but from the adjoining counties.  Holidaymakers from many nearby seaside resorts should help make this a most enjoyable reunion.

Not far from Sligo, on the road to Bundoran, lies at Drumcliffe the resting place of the poet Yeats, and the renowned Yeats country is fittingly commemorated on the Lough Gill Maiden Plate and the Benbulben Handicap Hurdle.

The course at Cleveragh, set in most picturesque surroundings is in excellent condition with a fine covering of grass and everything has been done to insure the success of the first fixture there”.

“The enthusiasm of the Sligo people for their new racecourse was underlined at Cleveragh yesterday when, in brilliant sunshine, they thronged enclosures and stands to greet the first meeting in the county since 1942.  The honours for the first winner on the new track were shared by trainer Dan Moore and jockey Pat Doyle.”

It is fitting that County Sligo Races are currently continuing in the tradition of their forefathers and engaging in further developments at the facility.   In 2013 the first stage of a capital development project costing in the region of €2.5 million was completed prior to the first race meeting which took place on Sunday 5th May 2013.  It comprised a new Grandstand, Jockey Changing facilities, Showers, Toilets and Sauna.  Pavillon Bar, Tote Betting facility, and new Offices and Turnstiles at the main entrance.

In October 2015, the Board of Horse Racing Ireland (HRI) under its Racecourse Capital Development scheme announced that County Sligo Races had been approved for grant aid of close to €800,000. Sligo Racecourse has plans in place for a series of upgrades costing in excess of €1.9 million.

These upgrades have now commenced with the smaller projects underway – cladding and erection of lean-to on existing shed in stable yard to house starting stalls and steeplechase fences. The upgrading of a floor in the public bar and restaurant.  This is due for completion prior to the first race meeting on May 1st, 2016.  The upgrading and remodelling of the first floor bar in the main grandstand, which will see customer capacity increased by 40% will get underway after racing in 2016, in addition to the extension of the existing balcony, which will wrap around the corner of the stand giving improved views of the racecourse. Other significant works include the renovation of the bar and restaurant, the creation of an indoor play area, upgrades to the weigh room, a new presentation podium, upgrading of the Owners and Trainers bar, a new entrance building with turnstiles and toilets and the installation of glass canopies to provide shelter.

The most ambitious part of Sligo’s development plans is the construction of a new two-storey hospitality building overlooking the parade ring and track, which will house a public restaurant on the top level and bar and hospitality facilities on the ground floor with an extensive viewing area. It is envisaged that this work will commence in 2018 and be completed in 2019.

The plans we have in place for Sligo Racecourse are a continuation of the investment in customer facilities that we have been making over the last number of years. Our core aim is to ensure the comfort and enjoyment of our racegoers and all participants in the sport and part of our focus is to ensure that everyone is afforded great views of the track.

A Day at the Races

The Hats Are On

Decide which cookies you want to allow. You can change these settings at any time. However, this can result in some functions no longer being available. For information on deleting the cookies, please consult your browser’s help.
Save my preferences
close

We use cookies to personalise content and ads, to provide social media features and to analyse our traffic. We also share information about your use of our site with our social media, advertising and analytics partners who may combine it with other information that you’ve provided to them or that they’ve collected from your use of their services.
doneAllow Cookies close cookiePrivacy policy settingsAdvanced